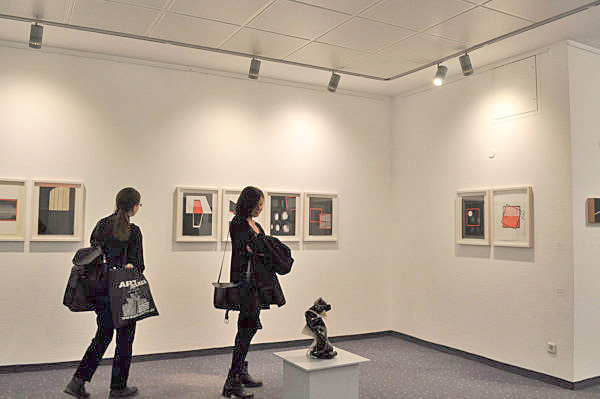 The Berlin Women’s Initiative Xanthippe e.V., founded in 1993, focuses on the promotion of women´s art. The founders of the association chose Socrates, who was disputed as a contentious figure, to identify the centuries-old, male-dominated interpretation of history, in which the creative energy of women was always perceived as a danger to the male hierarchies. They explained the name as “… symbolic for the will of the founders to do something against the prejudices that self-confident, committed women and their professional skills are represented enough in the arts. The association’s intention is consequently to bring more attention and recognition to the performance of artists and scientists ”. Two years after its foundation, the Xanthippen took over Inselgalerie at Inselstraße 13 in Berlin-Mitte, primarily to create a public platform for female artists.

Under the long-term management of Ilse-Maria Dorfstecher, Inselgalerie is the only gallery in Berlin which has continuously exhibited women´s art. The gallery displays cross-generational female artists. By focusing on the representation of younger artists, Inselgalerie helps them reach a wider public, whilst also giving the opportunity to be displayed in front of other gallery owners and collectors. Inselgalerie is one of the most important German institutions which challenges and raises awareness to the issue of women artists´ loss-making, where fees, exhibition opportunities and media perceptions all contribute to their lack of profit. Inselgalerie demands the same attention and evaluation of women’s art than that of men. Through consistent and high-quality exhibitions and experimental offers, the gallery brings this topic into public consciousness and thus promotes artistic discourse.

From the beginning, the gallery program included not only exhibitions, but also readings, talks, lectures and concerts, all primarily led by and involving women. The Berlin women’s initiative Xanthippe e. V. association and its gallery, created by seven women from the East in the early 1990s, has now become a permanent Berlin institution. The association, as well as its lively network, involving numerous political and cultural actors, supports a concept that unconventionally promotes the profile of young women, and at the same time, places the work of women in the focus of artistic debate. In 2007, the founder and long-time chairwoman of the board, Ilse-Maria Dorfstecher, was honored with the Berlin Women’s Prize for her support and networking, exhibitions and promotion of female artists. The reasoning states: “A special merit lies in the rediscovery and appreciation of women artists who have been forgotten by the breaks in German history as well as by the male-centered reception of the art business.”

Thanks to the support of the Senate Department for Culture and the support of this grown network, the Xanthippen managed to take the Inselgalerie on their very involuntary hike from Inselstraße 13, via Torstr. 207, to its current third location in Berlin-Friedrichshain, always lively and resistant.

With Eva Hübner, an experienced cultural manager, the association has won another champion for women’s art and Inselgalerie has acquired a new director. Inselgalerie mainly programmatically invites artists who need a space protected from market mechanisms in the metropolis of Berlin, allowing their positions to publicly be put up for discussion. Of course, the gallery also works with artists who have already found recognition in society. It is about the question of artistic values ​​and their justification for our life. The rooms in Petersburger Straße offer the opportunity to map these dialogues and discussions, to make them tangible.

With a newly launched series of cabinet exhibitions, the Inselgalerie wants to commemorate the many pioneers who worked in the 20th century and are now in danger of being forgotten. The parallel presentation of contemporary positions in the gallery is the program. A new generation replaces the founders. Today women from all over Germany are counted among the Xanthippen. The association will continue to be open to all supporters who want to fight for female positions in museums and galleries.